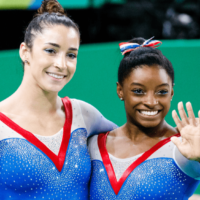 Simone Biles, Aly Raisman and more top U.S. women gymnasts were among those to provide testimony Wednesday at the Senate Judiciary Committee’s hearing on sexual abuse allegations against former USA Gymnastics doctor Larry Nassar. Biles was joined by McKayla Maroney, Maggie Nichols and Aly Raisman in Washington, D.C., just four of the gymnasts among hundreds of other women who said they were sexually abused by Nassar, who worked as a doctor for USA Gymnastics from 1978 to 2016. Nassar is currently serving a life sentence in prison after being convicted on sexual assault and child pornography charges.

Wednesday’s hearing serves to investigate the FBI’s mishandling of sexual abuse allegations against Nassar. A July report from the Department of Justice concluded the FBI showed “extremely poor judgement” in the handling of 2015 allegations against Nassar, noting that FBI agents in Indianapolis made “materially false statements,” during interviews with federal officials. The false statements were reportedly made in an effort to “minimize errors made by the Indianapolis Field Office.”

During Wednesday’s testimony, Biles criticized both USA Gymnastics and the U.S. Olympic & Paralympic Committee: “To be clear, I blame Larry Nassar and I also blame an entire system that enabled and perpetrated his abuse. The scars of this horrific abuse continue. The impact of this man’s abuse will never be over. We have been failed and we deserve answers. It really feels like the FBI turned a blind eye to us.”