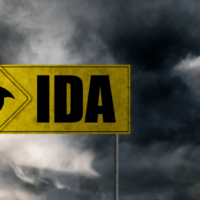 Ida weakened to a tropical storm early Monday over southwestern Mississippi, after battering southern Louisiana on Sunday as a Category 4 storm with winds of 150 miles per hour. In a 4 a.m. CDT update, the National Hurricane Center (“NHC”) said Ida had maximum sustained winds of 60 mph, and was located 90 miles south-southwest of Jackson, Miss., and 50 miles north-northeast of Baton Rouge, La. Ida was moving north at 13 mph.

Ida strengthened from a Category 2 to a Category 4 within two hours on Sunday morning. By late Sunday, it was back to a Category 2. Despite the drop in strength, however, the NHC said portions of southeastern Louisiana and southern Mississippi will continue to experience a “dangerous storm surge, damaging winds and flash flooding.” A storm surge warning was in effect from Grand Isle, La., to the Alabama-Florida border while a tropical storm warning was active for the same region including Lake Pontchartrain, Lake Maurepas and Metropolitan New Orleans.Ida is forecast to travel inland over portions of Louisiana and western Mississippi on Monday and Monday night. The highest rainfall total was recorded in LaPlace, Louisiana, which received 15 inches. 16 states from Mississippi to New Jersey are on alert for flash flooding, from the Gulf Coast to New Jersey. Ida is forecast to weaken more over the next day or so, becoming a tropical depression by Monday evening.

As of early Monday, more than 1 million Louisiana utility customers are without power, according to PowerOutage.us. On Sunday evening, New Orleans said the entire city lost power after “catastrophic transmission damage.” Ida made landfall on Sunday on the anniversary of Katrina, the Category 3 storm that devastated Louisiana and Mississippi 16 years ago.