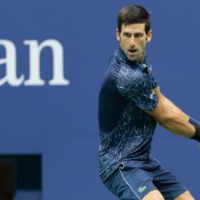 No. 1 seeded Novak Djokovic of Serbia rallied for a 6-7 (4), 6-4, 6-4, 6-3 win over Matteo Berrettini of Italy in the Wimbledon men’s tennis final Sunday, earning him a record-tying 20th Grand Slam singles title. The 34-year-old Djokovic, who won the tournament in 2018 and 2019 before last year’s event was canceled, earned his third straight championship at Wimbledon, and sixth overall. Djokovic also holds nine titles at the Australian Open, three at the U.S. Open and two at the French Open to tie Swiss star Roger Federer and Spaniard Rafael Nadal for the most majors won by a man in the history of the sport.

Djokovic, who also won the French Open and the Australian Open earlier this year, becomes the first male since Rod Laver in 1969 to win the first three major tournaments in one season. He is aiming for a calendar-year Grand Slam — something not achieved by a male player since Laver more than five decades ago — at the U.S. Open, which begins Aug. 30. Sunday’s final at Wimbledon marked Djokovic’s 30th major final — one shy of Federer’s record 31 among men.